The individual video and video mosaic

The host may decide to have one of the participants in an individual video.

The host could choose which participant to be shown in the Individual video from the drop-down menu on the top of the video window.

The individual video can also be turned off.

Both the individual video and video-mosaic buttons are located on the right side of the virtual classroom. Each of them can be clicked to expand into a window. 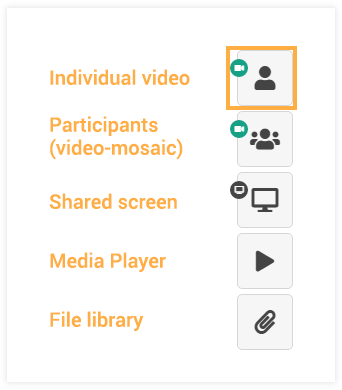 Clicking on the Individual/Participants (video-mosaic) button will either show or hide the video view but it does not turn on/off the camera. When the video connection is active, the little camera icon will become green.

All of the participants, who have entered the virtual classroom, become part of the video mosaic by default (except for the host), even if they have entered without a camera, or have decided later to turn it off. If someone does not have a video shown, the reason for that will be explained in a short notice inside their box in the mosaic, right under the name. The status of the camera could be:

Synchronizing the video windows with the participants

The host can select the option to synchronize the video windows (including the window of the media player and screen sharing) for all participants. This could be done from the menu shown below which is opened by clicking on the three dots in his own video box or that of a participant. A new window will open.

The video box settings allow the Host to control each video box separately for the participants in the current session. These include Individual Video, Video Mosaic, Screen Sharing, and Media Player boxes. Each of these video boxes has a dropdown menu (in the three dots at the top) with the following options:

“When the host opens, closes, chooses a full-screen of the video box – do the same for the participants.” 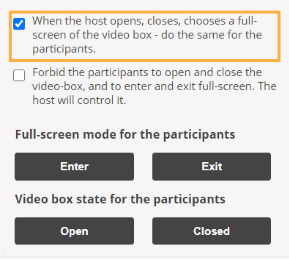 NOTE: This option is turned ON by default.

“Forbid the participants to open and close the video-box, and to enter and exit full-screen. The host will control it.”

When this option is turned ON, participants will not be able to close the box or enter full-screen mode. The Close and Full-screen buttons on their video box will disappear. 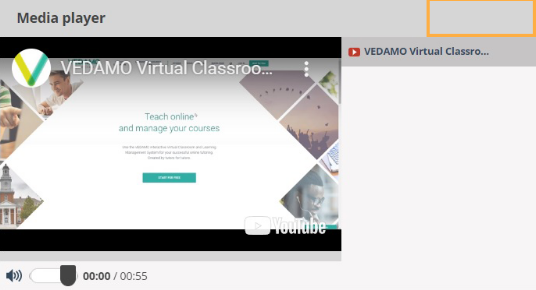 Also, participants will not be able to Open and Close the video box by clicking its icon on the right side of the screen.

This video box now is controlled only by the host.

NOTE: This option is turned OFF by default.

Full-screen mode for the participants 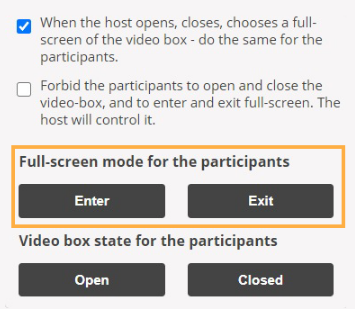 “Video box state for the participants” 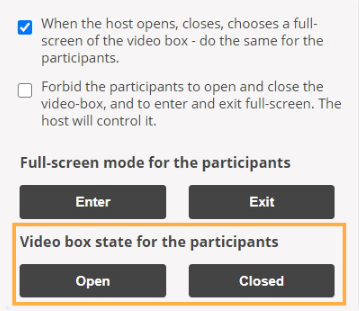 As it is with the Video Windows controls, participants could show/hide the shared screen from the share-screen button on the right side.

Again, this doesn’t turn on/off the function – this is done by the share-screen button at the bottom of the screen. Here is the difference:

The host could request a participant to share their screen. This can be done from the drop-down menu of the share-screen box.

The participant will receive a message for the request and they could choose whether to share their screen or not.

If the Cancel button is clicked, the host will receive this notification with an option to resend the request.

Once a participant has allowed their screen to be shared, it remains shared until the participant decides to stop the sharing, no matter how many times their screen sharing video box is opened and closed.

This means that the participants can share the sound coming from their computer (another tab in the same browser) without using a microphone. If they want to participate in the conversation they will have to enable their microphones.

For example, if someone wants to share a YouTube video or an mp3 file played on his/her device outside the virtual classroom, they can do that by sharing their screen with audio.

However, this can be done only in Google Chrome and Edge, since these two browsers only provide this possibility.

Note: Screen share with audio can be used on:

At the moment this feature is not compatible with mobile devices.

In the VEDAMO Virtual Classroom, you also have the ability to share two screens at the same time. By default, this option is turned off but you can turn it on by clicking it in the Settings menu.

When selected an additional video box will appear on the right side of the screen which is for the host’s screen sharing. This option leaves the other screen-sharing box available for use. This allows the host to share their screen without stopping the participant’s shared screen so that participants can see two shared screens simultaneously – the host’s and one participant’s. 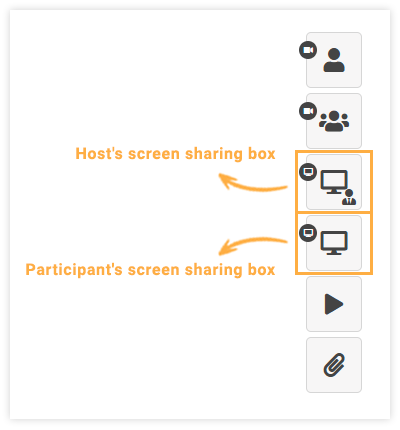 Bear in mind that the same user’s screen cannot be shared in both of the screen-sharing boxes simultaneously. This means that if the host is sharing his/her screen in the first box, once he selects himself/herself in the second box, the stream will automatically stop in the first and will continue in the second.

If the participants are divided into groups in breakout rooms, the host could set a different shared screen for each group.
Only one shared screen is allowed at the same time in each group.

For all other functional windows in VEDAMO Virtual classroom, check the full article for Virtual Classroom Functional Windows

Was this article helpful?